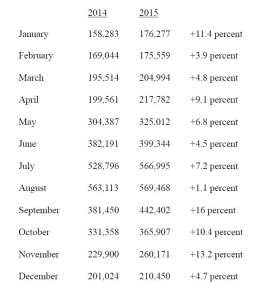 The Mackinac Bridge Authority (MBA) announced today that bridge traffic during each of the last 13 months has increased over the prior year, a positive trend through 2015.

“The improving economy is likely the largest factor driving this increase in traffic, with low fuel prices, our special events, and travel advertising contributing as well,” said MBA Executive Secretary Bob Sweeney. “While it’s too soon to determine whether this represents a long term trend for the bridge, it’s very encouraging news moving forward.”

The MBA’s sole source of funding is from tolls and fees collected at the bridge, with all revenue used to maintain, operate and protect the 58-year-old National Historic Civil Engineering Landmark. As traffic increases, so does the bridge’s funding for maintenance and capital projects.

“The Mackinac Bridge Authority has scheduled $180 million in preventive maintenance work over the next decade, and $400 million in the next 20 years,” Sweeney said. “Increased bridge traffic will help ensure that we have the necessary revenue to keep the bridge structurally sound and safe for everyone.”