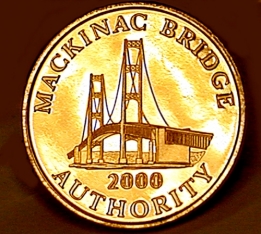 Now available for sale is the 2010 National Historic Civil Engineering Landmark/Lawrence A. Rubin Medallion. To order this or previous gift packs stop at the Mackinac Bridge Administration building or download and mail in the order form with the correct postage.

We are pleased to offer Mackinac Bridge commemorative token gift packs/medallion. Collectors and members of the public can purchase coins in gift pack sets for $10 per gift pack.