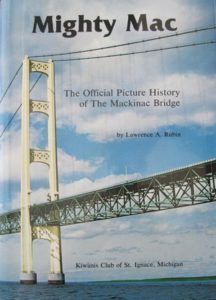 The official picture history of the construction of the Mackinac Bridge. Two hundred and four captioned photographs of the building of the Bridge describe in layman’s language the methods and techniques used to get a toe-hold in the deep and turbulent Straits of Mackinac; erect the twin towers as high as the Washington Monument; connect the four story high girders to support the four lane roadway nearly five miles long. It was opened on November 1, 1957 as scheduled 42 months earlier when ground was broken on May 6, 1954.

Rubin served as the executive officer of the Mackinac Bridge Authority from its creation in 1950 until he retired 33 years later. A native of near Boston, MA, he lived in St. Ignace, Michigan until his death in 2010. 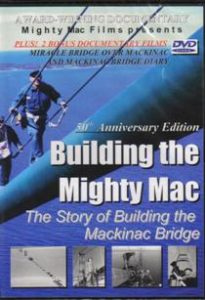 The  Building the Mighty Mac DVD is available by contacting the St.Ignace Chamber of Commerce at: