History of the Bridge 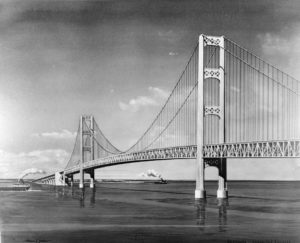 A newspaper, the Lansing Republican, dated February 5, 1884, reprinted a story from the Grand Traverse Herald pointing out that the experiment to provide all-year service across the Straits by boat had failed, and that if a great east-west route were ever to be established through Michigan a bridge or tunnel would be required. The editor considered both as practicable; the only question in his mind was that of cost.

The dedication of the Brooklyn Bridge in 1883 gave Mackinac Bridge backers encouragement. A St. Ignace store owner in 1884 reprinted an artist’s conception of the famous New York structure in his advertising and captioned it “Proposed bridge across the Straits of Mackinac.”

On July 1, 1888, the board of directors of the famous Grand Hotel at Mackinac Island held their first meeting and the minutes show that Cornelius Vanderbilt said: “We now have the largest, well-equipped hotel of its kind in the world for a short season business. Now what we need is a bridge across the Straits.” The great Firth of Forth Bridge in Scotland was under construction then and completed in 1889.

During the ensuing years there were a few farfetched ideas about the connection of Michigan’s two peninsulas. In 1920 the state highway commissioner suggested a floating tunnel. He invited other engineers to suggest ideas for crossing the Straits. Mr. C. E. Fowler of New York City came forward with an ambitious project to solve the problem with a series of bridges and causeways that would start at Cheboygan, some 17 miles southeast of Mackinaw City, traverse Bois Blanc and Round Islands, touch the southern tip of Mackinac Island, and leap across the deep channel at St. Ignace. 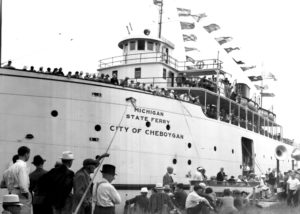 In 1923 the Legislature ordered the State Highway Department to establish a ferry service at the Straits. Within five years traffic on this facility became so heavy that the late Governor Fred Green ordered the same agency to make a study of bridge feasibility. The report was favorable and its cost was estimated at 30 million dollars. Some strides to get the project underway were taken but it was eventually dropped.

“Early in 1934 the matter was again revived and proposed as a suitable P.W.A. project. In the extra session of 1934 the Legislature created the Mackinac Straits Bridge Authority of Michigan and empowered it to investigate the feasibility of such construction and to finance the work by issuance of revenue bonds. The Authority began its studies in May 1934 and has been continuously active since that date.

Although limited funds precluded full and complete preliminary studies, the Authority was able to reach the conclusion that it was feasible to construct a bridge directly across the Straits at an estimated cost of not more than $32,400,000 for a combined two lane highway and one-track railway bridge. In its studies the Authority utilized soundings made by the War Department Engineers and was aided by the gratuitous counsel and advice of engineers and contractors experienced in work of this magnitude.”

The Authority made two attempts between 1934 and 1936 to obtain loans and grants from the Federal Emergency Administration of Public Works, but P.W.A. refused both applications despite endorsement by the U.S. Army Corps of Engineers and the report that the late President Roosevelt favored the bridge.

Notwithstanding these setbacks, bridge backers resumed their efforts with their usual vigor. From 1936 to 1940 a new direct route was selected, borings were made, traffic, geologic, ice and water current studies of a very comprehensive nature were completed. A mole or causeway jutting 4,200 feet into the Straits from St. Ignace south was constructed. Preliminary plans for a double suspension span were drawn and the possibility of a bridge became very real. But the Armies of Europe began to march and bridge progress came to a halt. Finally, in 1947, the State Legislature abolished the Mackinac Straits Bridge Authority.

Again, the bridge backers swung into action and a citizens’ committee was established to obtain legislation recreating a bridge authority. By 1950 the legislation was enacted, but it limited the newly created Authority to determine feasibility only. The law required the Authority to consult with three of the world’s foremost long span bridge engineers and traffic consultants for advice on physical and financial feasibility.

In January of 1951 the Authority submitted a very favorable preliminary report, stating that a bridge could be built and financed with revenue bonds for $86,000,000 but because of the shortage of materials due to the Korean outbreak, legislation to finance and build the structure was delayed until early in 1952. Immediately, the Authority asked the Reconstruction Finance Corporation to purchase $85,000,000 worth of bonds.

While this agency was studying the request, a private investment banker became interested in the project, and offered to manage a group of investment companies which would underwrite the sale of the bonds. The Authority accepted the offer and was ready to offer its bonds for sale by March of 1953. There were not enough takers to guarantee successful underwriting. The money market had weakened.

In order to make the bonds more attractive, the Legislature passed an act during the Spring of 1953 whereby the operating and maintenance cost of the structure, up to $417,000 annually, would be paid for out of gasoline and license plate taxes. Another effort to finance with this added inducement in June of 1953 was likewise unsuccessful, but toward the end of the year the market recovered and $99,800,000 worth of Mackinac Bridge bonds were bought by investors all over the country. Contracts which had been awarded contingent upon this financing were immediately implemented. 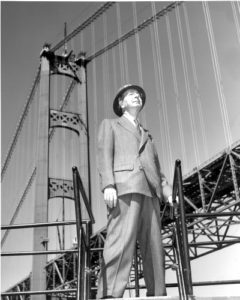 The five-mile bridge, including approaches, and the world’s longest suspension bridge between cable anchorages, had been designed by the great engineer Dr. David B. Steinman. Merritt-Chapman & Scott Corporation’s $25,735,600 agreement to build all the foundations led to the mobilization of the largest bridge construction fleet ever assembled. The American Bridge Division of United States Steel Corporation, awarded a $44,532,900 contract to build this superstructure, began its work of planning and assembly. In U.S. Steel’s mills the various shapes, plates, bars, wire and cables of steel necessary for the superstructure and for the caissons and cofferdams of the foundation, were prepared. The bridge was officially begun amid proper ceremonies on May 7 & 8, 1954, at St. Ignace and Mackinaw City. 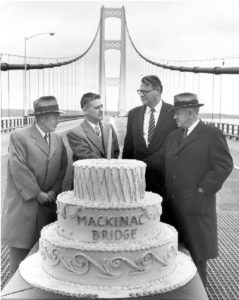 The bridge opened to traffic on November 1, 1957 according to schedule, despite the many hazards of marine construction over the turbulent Straits of Mackinac. The last of the Mackinac Bridge bonds were retired July 1, 1986. Fare revenues are now used to operate and maintain the Bridge and repay the State of Michigan for monies advanced to the Authority since the facility opened to traffic in 1957.