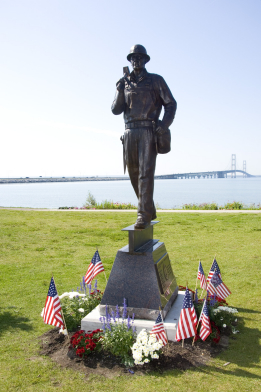 In May 2004, during a public ceremony, the Michigan Department of Transportation (MDOT) and the Mackinac Bridge Authority (MBA) presented a special plaque to the surviving family members honoring these men.

During the construction of the Mackinac Bridge in the 1950’s, five men unfortunately lost their lives.

One man died in a diving accident; one man fell in a caisson while welding; one man fell into the water and drowned; and two men fell from a temporary catwalk near the top of north tower.

The names of those five men (and the date of their deaths) are listed below.

After the bridge was built and opened to traffic, one MBA maintenance worker lost his life. On August 7, 1997, Daniel Doyle, a bridge painter, fell from his painting platform and drowned in the Straits of Mackinac. His tragic and unfortunate death shocked everyone.

Dan and others who have lost their lives on the job are permanently honored by MDOT in the Clare Welcome Center located in Clare, Michigan. The Employee Memorial is a permanent tribute to highway workers all over Michigan who lost their lives along highways and bridges. The Clare memorial provides an opportunity to educate the public about the human cost of building and maintaining Michigan’s transportation system.

All six of these men will forever be remembered by many. 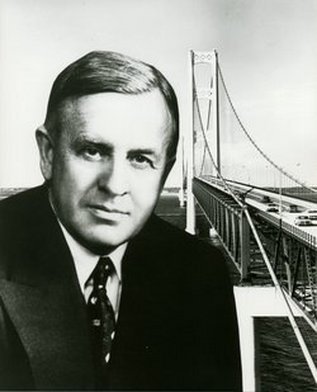 Born in St. Ignace, Michigan, Mr. Brown Graduated from LaSalle High school in 1905, Albion College in 1911, and did post graduate work at the University of Illinois.  Prentiss married Marion Walker, and practiced law with his father in the St. Ignace area. From 1932 to 1943 he served in the U.S. Congress and Senate. In 1950 Prentiss M. Brown was appointed to the Mackinac Bridge Authority and elected its first Chairman. Mr. Brown, with  the assistance of fellow Authority members William Cochran, Murray Van Wagoner, and Charles Fisher, Jr., secured the financing for the Mackinac Bridge. Mr. Brown considered this to be one of his most rewarding accomplishments.

Prentiss M. Brown is well known for his struggle to get the Mackinac Bridge built over the Straits of Mackinac. Mr. Jack Carlisle, in a radio broadcast over WWJ radio station on February 22, 1954, told his listeners of Mr. Brown’s struggle. The transcript from Mr. Carlisle’s broadcast was later published in a newspaper and is as follows:

” After a 20-year fight which often seemed hopeless, there finally is going to be a five-mile bridge across the Straits of Mackinac. As one of the states most ambitious projects, it will link Michigan’s two peninsula’s. It will cost about $99 million. It is scheduled for completion in November, 1957.

The bridge project had many stalwart partisans. However, the project actually became a reality through the determination of one man –  Prentiss M. Brown, Chairman of the Michigan Mackinac Bridge Authority. Brown, a former United States Senator and Chairman of the Board of the Detroit Edison Company, refused to accept defeat when it seemed inevitable. Prentiss M. Brown just wouldn’t stay licked.

His energetic determination to get the Mackinac Bridge financed is undoubtedly due to the fact that he was born and raised in the midst of a daily realization of the need for the bridge. Now 64 years old, Prentiss Brown spent a lifetime in his old home town of Saint Ignace, Michigan. He was once a bellhop at the old Astor Hotel on Mackinac Island. Probably the bridge idea would have died completely in the last year –  if it had not been for an incident that happened to Brown 34 years ago. He was 30 years old then and a lawyer. He was scheduled to appear before the State Supreme Court in Lansing to argue a case.

Brown had to get across the Straits to catch a train at Mackinaw City. However, both of the ferry boats were stuck in the winter ice. He and another hardy voyager, who also had important business on the side of the Straits, hired a horse and a cutter. They started across the ice. They ran into ice hummocks ten feet high and had to send the cutter back to Saint Ignace. They proceeded on foot.

They ran into 50 acres of open water, like a big pond, and had to circle it. All in all, they hiked four miles across the ice. The wind was blowing up a small gale. It was snowing. By the time they had spent most of the day walking – well, they missed their train.

Prentiss Brown never forgot. That is the reason that 20 years ago Brown became legal counsel for the first Mackinac Bridge Commission. Back in 1933 under Governor Comstock. And Prentiss worked for love. He would accept no money. Four years ago he became chairman of the Mackinac Bridge Authority. By 1952, it looked like the RFC woud finance the bridge across the Straits. Whereupon, a New York investment broker offered to organize a private syndicate in October, 1952, to do the financing.

He tried to float the Mackinac Bridge bonds in March and again in June, 1953. Both times he failed. As a matter of fact, it looked like the bridge project was a gone goose last June. For lack of financing. Due to the high cost of money. But Prentiss refused to stay licked. The project was revived on the New York bond market in November due to the increase in interest rates and the increase in traffic across the Straits.

It was only six days ago that  a check for $98,500,000 to finance  the Straits of Mackinac Bridge was put into Brown’s hands in New York. One hundred and fifty investment brokers underwrote the sale of revenue bonds for a commission pot of three million dollars.

Actually, the deal went through last year with just 13 days to spare before the offer of State maintenance for the bridge would have expired. In a four-year battle under Brown to get the bridge finance – this was a slim margin to win a victory.

Michigan will not soon forget the gallant fight of Prentiss M. Brown for the Straits of Mackinac Bridge.”

The Mackinac Bridge Authority has created a token in honor of Prentiss M. Brown. To view this and all other tokens visit Token Gift Packs / Medallion.