If you’ve got a Mackinac Bridge fan in the family, the Mackinac Bridge Authority (MBA) has anniversary posters, commemorative tokens, and medallions available for purchase by mail or in the authority’s administration building in St. Ignace.
“Admirers of the bridge who missed out on the first run of anniversary posters or didn’t know bridge tokens are still available have another opportunity to get these commemorative items,” said MBA Executive Secretary Bob Sweeney. 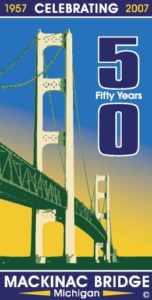 The posters are available in four designs, for $10 each or $30 for any combination of four. View Posters

Also available is a series of tokens, and medallions offered in gift packs, including:

Images of the tokens, and medallions are available online. The gift sets are $10 each, rolls of tokens are $96, and shipping and handling varies by quantity ordered.