Industrial painting requires some pretty advanced equipment, from removal and collection to providing working conditions safe from wind and rain. Add to that the challenge of performing that work on the 552-foot towers of the Mackinac Bridge and some creative engineering is required. The movable scaffold system designed by Ruby+Associates of Bingham Farms, Mich., fabricated by Moran Iron Works of Onaway, Mich., and used by Seaway Painting of Livonia, Mich., not only allowed that job to be done efficiently on both towers of the bridge, but also earned a structural engineering award in competition with many other impressive projects.

“As this is the first time in the bridge’s history when the towers have been stripped to bare metal and repainted, it makes sense that Ruby+Associates, Moran Iron Works, and Seaway Painting would need new, innovative equipment to get the job done,” said Mackinac Bridge Authority Executive Secretary Kim Nowack. “We congratulate them on the award and thank them for their work preserving this infrastructure icon.”

The platforms were custom designed and built for Seaway Painting crews to enclose and move up and down the bridge’s towers above the roadway deck, first during the 2017-2018 project to strip and repaint the bridge’s north tower, then again during the current 2019-2020 project to do the same on the south tower. The platforms encircled the tower legs and allowed workers to adjust it to accommodate the tower tapering near the top. Another platform allowed access to the struts joining the tower legs.

The award nomination noted that the design needed to withstand winds regularly exceeding 100 mph and allow for the enclosure and capture of paint and sandblasting materials. The original paint is lead-based and Seaway is required to contain 100 percent of the paint as it is removed and ship it to an appropriate landfill facility. The new paint, which is zinc-based, is expected to last at least 35 years, with periodic maintenance.

The south tower contract is for just less than $6.5 million, with Seaway required to complete the project by Dec. 31, 2020. The contract to repaint the north tower was just less than $6.3 million. Installation and removal of the platforms has required brief closures during the overnight and early morning hours on several occasions. 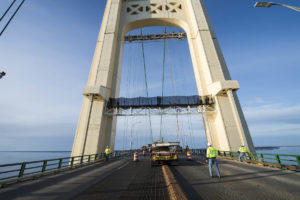 Raising of painting platform on the north tower of the Mackinac Bridge, contractor Seaway Painting 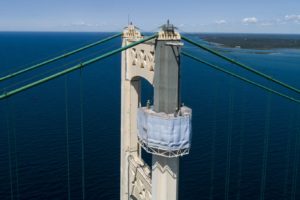