Some engineering professors had an idea to monitor bridges with sensors powered with the vibrations generated by traffic. Think self-winding watch.

Those professors, including one at Michigan State University, think they have mastered the technology. But they needed a real-world platform to try it out.

Enter Bob Sweeney and the Mackinac Bridge Authority (MBA). Sweeney heard about the developing technology and knew the Mackinac Bridge, because of its status as a transportation icon and modern marvel of engineering, would provide a high-profile test site.

That’s why later this month, Nizar Lajnef, associate professor of civil engineering at Michigan State University (MSU), and professor Shantanu Chakarabartty from Washington University in St. Louis (WUSTL) will place six of these prototype sensors beneath the bridge. It’s part of a demonstration project by MSU, WUSTL, and the University of Southern California (professor Sami Masri) for the Federal Highway Administration (FHWA).

“We could test this innovative technology on any number of bridges, but what location could be better than an engineering icon like the Mackinac Bridge?” said Lajnef.

Several features of these sensors make them attractive to infrastructure managers. Typically, sensors become maintenance issues, requiring battery changes or wiring to power sources. Because these sensors have no external power source they eliminate that issue. They also don’t need wires to access their data; instead, that information can be accessed wirelessly by someone driving over the bridge with a laptop.

“There is huge potential and benefit for sensors like these on structures beyond the Mackinac Bridge, and we’re excited these prototypes are being tested here,” said MBA Executive Secretary Bob Sweeney. “We meticulously maintain and inspect the bridge each year, and sensors like these will complement our efforts, giving us even more information on the bridge’s condition to help keep it well-maintained and safe for many years to come.”

Bridges are subject to nearly constant stress and loading as vehicles cross over, and for a bridge like the Mackinac Bridge that can mean millions of data points gathered from a traditional sensor. Sweeney said these prototype sensors can be set to collect data in more specific ranges, making that data more manageable and meaningful.

“These sensors represent a long-term, low-cost solution for continuous condition assessment, and I’m confident they will offer solutions to extend the useful life of bridges and roads around our state and country,” Lajnef said.

If theses prototype sensors perform as intended, more may be added to the Mackinac Bridge next year. Sensors also will be installed at other bridges in the Washington, D.C., area and Virginia as part of an FHWA demonstration project and a new National Science Foundation project.

The Michigan Department of Transportation (MDOT) will make photos of the installation available to the media. 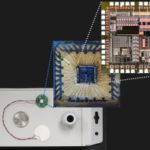 Photo – Infrastructure Sensor: A new type of infrastructure sensor developed by a team of researchers from Michigan State University (MSU), Washington University in St. Louis (WUSTL) and the University of Southern California is part of a demonstration project for the Federal Highway Administration (FHWA). The new sensors require no external power source, generating its own power using vibrations from traffic as it passes by. Photo courtesy of Kenji Anno, WUSTL.